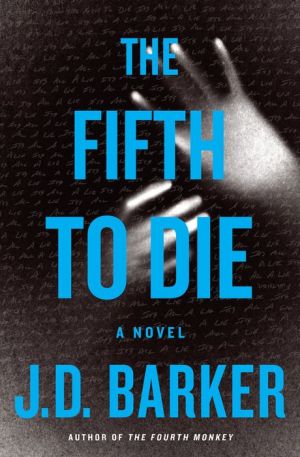 The Fifth to Die by J. D. Barker In the thrilling sequel to The Fourth Monkey, a new serial killer stalks the streets of Chicago, while Detective Porter delves deeper into the dark past of the Four Monkey Killer. A 4MK Thriller Detective Porter and the team have been pulled from the hunt for Anson Bishop, the Four Monkey Killer, by the feds. When the body of a young girl is found beneath the frozen waters of Jackson Park Lagoon, she is quickly identified as Ella Reynolds, missing three weeks. But how did she get there? The lagoon froze months earlier. More baffling? She’s found wearing the clothes of another girl, missing less than two days. While the detectives of Chicago Metro try to make sense of the quickly developing case, Porter secretly continues his pursuit of 4MK, knowing the best way to find Bishop is to track down his mother. When the captain finds out about Porter’s activities, he’s suspended, leaving his partners Clair and Nash to continue the search for the new killer alone.   Obsessed with catching Bishop, Porter follows a single grainy photograph from Chicago to the streets of New Orleans and stumbles into a world darker than he could have possibly imagined, where he quickly realizes that the only place more frightening than the mind of a serial killer is the mind of the mother from which he came.

Links:
book Period Power: A Manifesto for the Menstrual Movement
read How the Bible Actually Works: In Which I Explain How An Ancient, Ambiguous, and Diverse Book Leads Us to Wisdom Rather Than Answers--and Why That's Great News online